BlogSustainabilityCleaning Up The World Cup

Cleaning Up The World Cup 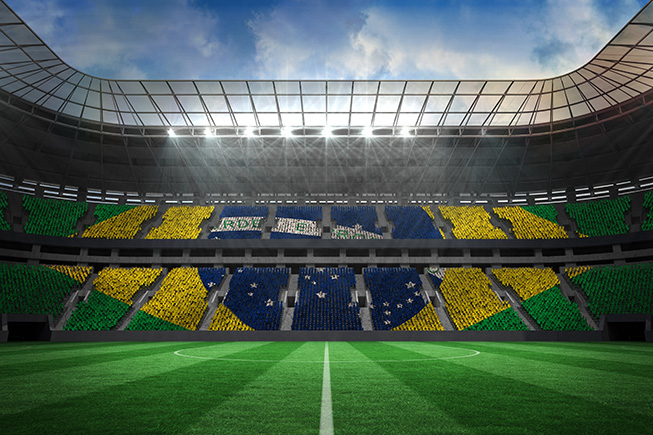 As fans cheer at the 2014 World Cup amid shouts of “Futebol,” a mixed undercurrent of waste and sustainability issues is vividly present.

Early on in the planning of the 2014 World Cup, discussions took place about how to make the event more environmentally friendly.  One of these talks was in 2011, with dignitaries and experts attending a two-day conference in Manaus, Brazil. The goal of the talk was to make the 2014 World Cup a sustainable event, according to FIFA, the governing organization of the World Cup.

Key areas of discussion about environmental sustainability included, among other topics, organizational governance, promoting environmental protection, offsetting carbon emissions, logistics, transportation, waste, water, consumption, and energy use.  These concerns were prompted in part by the approximate 2.72 million metric tons of greenhouse gases anticipated to be produced by domestic travel in Brazil alone related to the World Cup.  “That’s the equivalent of 560,000 passenger cars driving for one year,” The Nation reports.  Included in the discussion was talk about the placement and costs of the stadiums – Brazil spent about $325 million to build a World Cup stadium in the sensitive Amazon rainforest region.

Despite these discussions, criticisms have recently risen about how effective these sustainability efforts actually are.  One critic mentions cost overruns, missed deadlines, and neglected residents in the areas of the stadiums themselves, questioning the “needless expense” of resources used for stadium construction.  Others have pointed fingers at the lack of social service funding and new high rents in stadium areas.

Alongside these large-scale concerns are more positive actions.  Take, for instance, the 840 teams of pickers who are working to collect recycling at the World Cup for distribution to recycling cooperatives, and an overall sustainability education campaign aimed at event goers.  Just imagine the number of recycling bins required for 12 World Cup soccer stadiums!

Finally, World Cup teams themselves are going “green.” For example, England’s team partnering with Nike to create “green” uniforms from recycled plastic bottles.  Nike started making team soccer, or football, uniforms in 2010 for Brazil, Portugal, and the Netherlands, with a vision of creating products to allow for top-of-line athletic performance and lower environmental impacts.  “Innovation is embedded into the design and development process from the very beginning, addressing use of environmentally preferred materials, reduction of waste and eliminating toxics,” reads a statement describing the company’s “Nike Better World” ethos.

The World Cup teaches us that environmental footprint, social funding, and even recycling all need play role in the big picture. Due its vast size, the tournament’s sustainability and social issues will continue to be at the forefront, overshadowing the success of the event.

Tags:
environment, event recycling
This entry was posted in Sustainability. Bookmark the permalink.