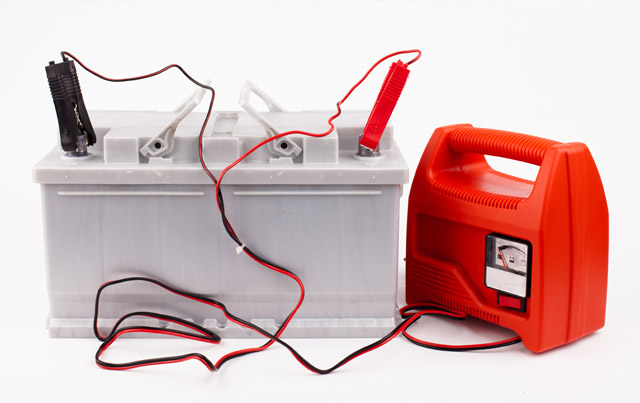 What do you think the most often recycled item is? Paper? Plastic? Soda cans? Well, we kind of gave it away in the title, but the most recycled item isn’t something commonly found in recycle containers; it’s car batteries. According to the Battery Council International over 99% of battery lead is recycled. Finding that level of recycling is great for any material but especially for something as dangerous as lead. So what happens to those batteries when they are sent to the recycling plant?

Old car batteries are fed into a piece of equipment called a hammer mill. This machine smashes the batteries to smithereens, reducing these big hunks of metal to small, nickel-sized chunks. The remains of the battery are channeled into big recycle containers filled with water so the different components of the battery can separate. The plants take advantage of the different properties of the components to easily separate them into three waste streams: lead, acid and plastic.

Getting The Lead Out

Lead and other heavy metals are extremely dangerous pollutants. Ingesting even a tiny amount of lead can lead to organ failure, brain damage and death. Children and pregnant women are especially at risk. This is why the governments of the U.S., Canada and other industrialized nations have very strict policies preventing lead from being simply dumped into landfills or down the drain. Battery recyclers take advantage of the fact that heavy lead pieces sink to the bottom of the recycle containers. The fragments  are collected and melted in blast furnaces. Any contaminants float to the surface of the molten metal and are skimmed off. The lead cools into ingots that are sent to manufacturers where they are used to make new batteries.

Car batteries work due to the electrochemical reactions between lead and acid. When the power cells are smashed and fed into recycle containers, the acid dissolves into the water. The water is piped off and mixed with a neutralizing agent that reacts with the acid and turns it into sodium sulfate salt. Some recyclers extract the salt from the solution and sell it to factories making products ranging from laundry detergent to glass. Other plants discharge the water into the sewer system, after of course making sure the stream meets local clean water regulations.

Whipping Out The Plastic

From a functional point of view batteries are just lead and acid, but from a structural standpoint they also contain plastic, usually polypropylene. The plastic is less dense then water so floats in the recycle containers. Recycling plants skim off the plastic to be washed and dried. The plastic pieces are melted down and cut up into pellets, ready for reuse. Most plastic recovered in this manner goes along with the lead ingots to make more batteries.

Car batteries may be the single greatest recycling success story in history, with nearly none of the material ending up back in the environment.

Tags:
recycle containers
This entry was posted in Blog, Sustainability. Bookmark the permalink.

One Response to Car Batteries: A Recycling Success Story