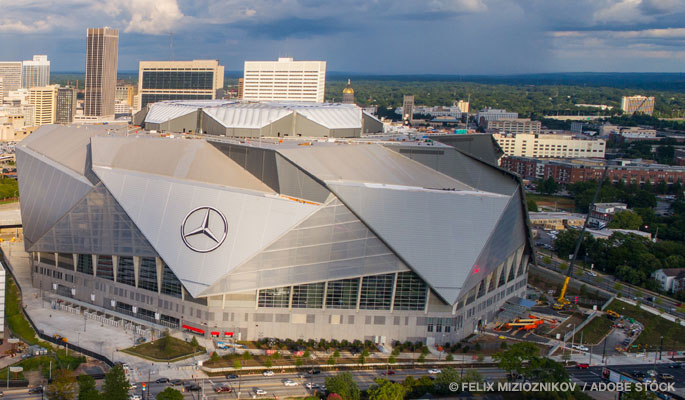 Atlanta’s Mercedes-Benz Stadium, which opened in 2017, is the home of the National Football League’s Falcons and Major League Soccer’s Atlanta United. The stadium has been billed as the most sustainable sports venue in the world. Here are the reasons why.

Mercedes-Benz Stadium is the first professional sports venue in the country to receive a LEED Platinum rating from the U.S. Green Building Council. To put this achievement in context, a building needs 40 points to be LEED-certified, at least 60 points for a Gold LEED rating, and a minimum of 80 points for Platinum status. Mercedes-Benz Stadium received 88 points. Also, Mercedes-Benz stadium is the nation’s first professional sports venue to earn all possible credits in LEED’s water efficiency category.

Stormwater Management Is a Priority

The venue’s designers prioritized stormwater management because the neighboring community is prone to flooding. To lower the flood risk, a cistern and a stormwater vault on-site have the combined capacity to hold over 2,000,000 gallons of stormwater. The stormwater from Mercedes-Benz stadium’s sustainability efforts is later used for irrigation and cooling.

Due to Mercedes-Benz stadium’s sustainability and its water conservation strategies, the venue lowered water use by 47 percent. Water-efficient fixtures such as high-efficiency toilets and waterless urinals are a significant part of the water conservation strategy. Landscaping with drought-resistant plants and installing water-efficient HVAC systems are other ways the stadium conserves water.

Stadium Visitors Recycle with a Purpose

The renewable energy from the stadium’s 4,000 solar panels generates 1.6M kilowatt-hours of power, which is enough for 10 Falcon games. Although many panels are on the roof, some are placed at ticket entryways and on parking lot canopies where they can be more easily seen by fans.

This entry was posted in Sustainability. Bookmark the permalink.